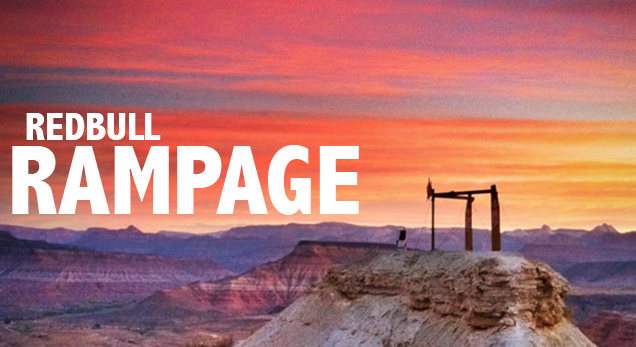 When the itinerary arrived in my inbox I couldn’t have been happier. I received an invite from GoPro to attend the Redbull Rampage for 9 days as a Filmer and editor. No problems there.

I arrived in Vegas at 8:50 PM on September 30th. I had just eaten dinner and was exhausted. My soon to be friend and co worker Trenton Pasic texted me to get a cab to the Monte Carlo. The cab ride was uneventful and so was my check in. So far so smooth. As I unlocked the room I noticed Trentons stuff on the ground but he wasn’t in the room. I gave him a call and found out he was a few rooms away in Toshi’s room. What does a man named Toshi look like? I have never met a Toshi… Hmmmm. soon to be answered. I threw my stuff down and knocked just a few doors away. I was greeted by the biggest smile at GoPro – Toshi Corbit himself. I briefly met Toshi and Trenton and explained how tired I was. They had other plans.

I can’t really remember the name of the sushi place but I do remember a lot of Saki. The sushi was awesome and the drinks just didn’t ever seem to go away. We left the sushi place via a cab and went back to the hotel before heading out.

Somehow Toshi convinced us that he had some emails to take care of so he wasn’t going out. If he actually managed to email anyone other than the toilet I would be completely impressed- not to say that the man couldn’t hold his own, (hell, he drank me under the table) but more because we drank A LOT. I don’t think anyone could or should be emailing in the state that we were all in. Toshi on the other hand is super human so he probably worked well into the night.

Trenton and I continued around for several hours. We never really found the perfect place for Sunday nights but we did eventually find our way back to the Monte. That was only after we somehow lost each other. Don’t ask, I don’t know.

The following day we rented cars and drove up the highway to Virgin, Utah. We got our credentials and headed up to the course for inspection.

When we first pulled up to the course I was overwhelmed. I remember that I couldn’t figure out how someone would walk up it let alone ride down it on a bike. This was going to be awesome. We shot some time lapses but mostly just stood around in awe. That night I could barely sleep. I knew the week ahead was going to be magic and that I was lucky enough to get to witness it first hand.

From there the week somewhat became a blur- and that is not one bit alcohol related. Everyday we were up early, to the venue, filming all day, and then finally sleep; dreaming of nights like Vegas. Every day it seemed like there was another epic surprise of some sort or another.

It felt like I was there for one long day before we headed back to Vegas. I flew from there to the GoPro headquarters in San Francisco where I lived out of a hotel for a few days and worked on the edit for their YouTube channel (The edit can be seen at the bottom of this page).

It was an amazing and exhausting week. A week better delivered in images- both sill and moving.

ALL PHOTOS SHOT WITH IPHONE 4